The “Open Mobile Project” developed at altLab- Lisbon’s hackerspace, was set as a first attempt to test and get to know the collaborative dynamics of this specific space while developing an art project.

The project consisted on inviting altLab’s members to participate on the construction of an art-piece, based on Alexander Calder’s mobiles, in which each piece of the mobile was to be developed by one or more members so that the final structure (the skeleton holding the pieces together) would be dependent of the assemblage of all of the pieces. 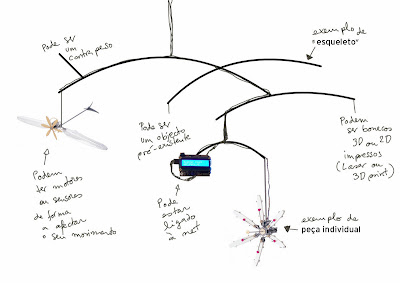 So, what was proposed was that the participants develop Open Mobile Pieces (what we called as OMPs) so that they could be at the final stage of the project integrated through a skeleton as the Open Mobile project.

With the unpredictability of replies coming from distant proponents (previous members/non-active and non-local), there was the case where ideas for OMPs were brought up to be developed locally.

“From your side, you have a box with a hole. When one peeks through the hole, you can see in real-time, what I’m seeing here in Barcelona.” 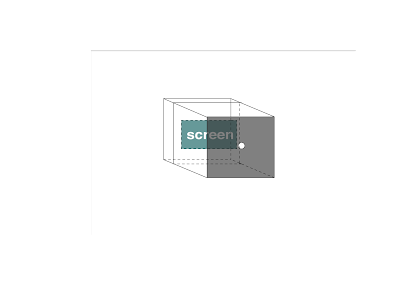 To a modular rectangular LED construction kit, by Tiago Rorke: 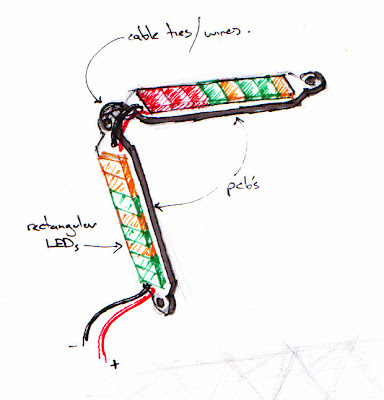 An open list was developed to present the OMPs suggested and to seek collaborators for the non-local proposals. Any member who didn’t propose an idea could participate as an OMP collaborator, by helping to develop an OMP.

A total of 9 pieces were suggested, 3 of these by non-local members in need of local collaborators.

Working at the space helps bringing attention to the project, nevertheless the meetings that gather all members are held punctually. The space is misused during regular weekdays, except for the meetings on Tuesday nights and occasional workshops during weekends. This is probably due to its de-centralized and hard to reach location (by public transports).

Although dates have been defined through the Open Call for the definition of intensive weekends and assembly nights, along with specific dates to finish the pieces and the overall project, the lack of a specific objective (such as an exhibition or presentation date) brings issues to the finishing of the pieces by the majority of collaborators. Often people asked me when the project was due, followed by an enquire on where it would be shown.

Location of the proponent is not an issue for the local development as long as the proponent finds a local committed collaborator, keeping in touch and coordinating the development process with her – this was the case with the MCS piece by Tiago Rorke.

During the development period of the Open Mobile Project, there were numerous events and people stopping by, calling for members either to participate in other projects, or just to getting to know altLab’s qualities. A sort of local and physical peer-to-peer network  is therefore formed – composed by common interests -  building a mesh of organizations and open communities that communicate with each other in order to develop local activities.

This affluence of people and events has affected this project in different ways, but a notorious one is the participation of Christoph Schneider who promptly developed the Open Octopus (see figure below), to be part of the Open Mobile Project. It is one of the finished pieces to be included on the project and it was developed on record time :-) 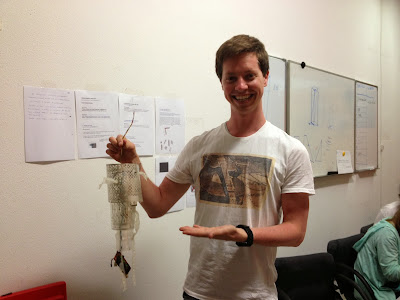 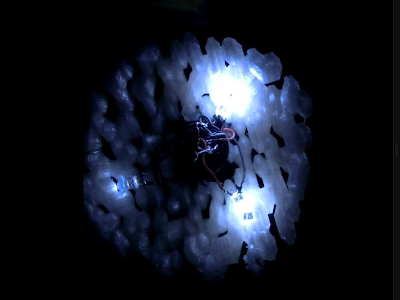 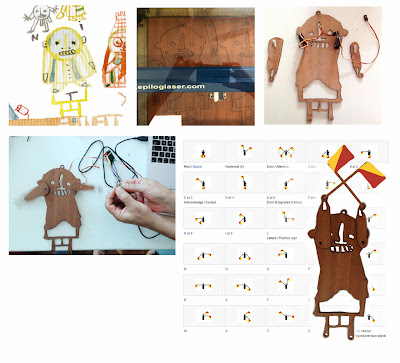 Semaphore WoMan, a remixed drawing from DITs’ website, proposed by Rita Sá with collaborators Guilherme Silveira and Maurício Martins.
Although the Open Mobile Project was not finished on time, some of the collaborators are still helping me with the conclusion of the unfinished pieces and some of the initial proponents still mention their interest in completing their proposed ideas. The project is to be shown on December 2013, at the Labs AZ meeting. More info soon.

Posted by Vincent Parollo at 10:47 AM No comments: 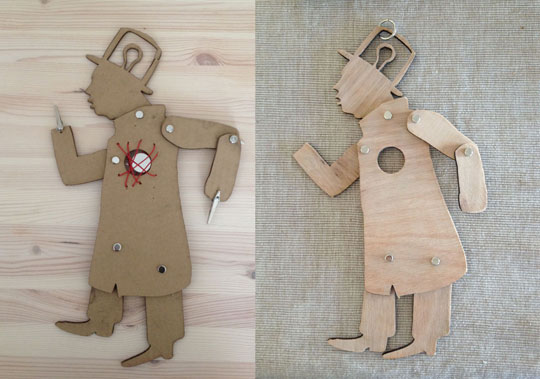 Edward Crocodile-Hands was thought to be an integral part of the Open Mobile project... however, Edward was a misfit for the project since handling him shakes the whole piece down... so Edward got his freedom and is now a single Hampelmann... when he takes his hand to his head, he lights up his idea hat... but maybe he does other stuff too, he's open to suggestions. 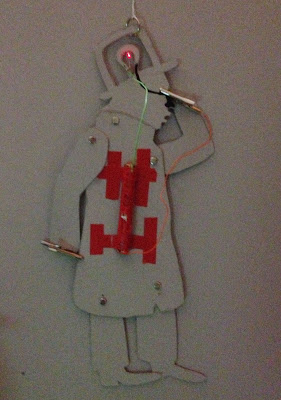 Edward's shape can be downloaded from DIT's mainsite, here and you can print it through a laser cutter. I'm still working on Edward and trying to figure him out (he's an odd fellow), but you can try it too.
Posted by Vincent Parollo at 7:54 AM No comments: 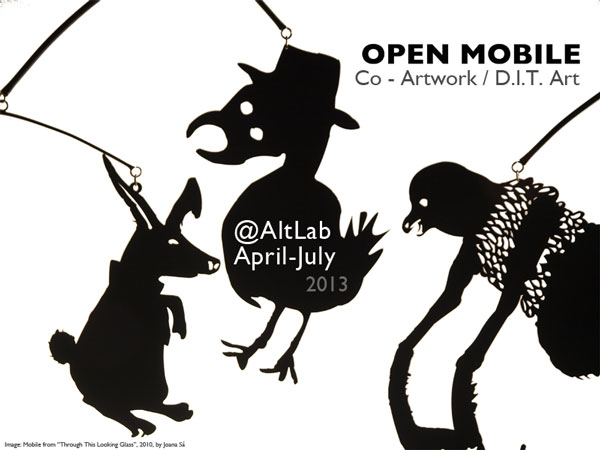 Open Mobile is a col­lab­o­ra­tive art­work that is being devel­oped at Alt­Lab and that is opened to all members.

The mobile is con­sti­tuted by pieces that are devel­oped indi­vid­u­ally or col­lab­o­ra­tively, and the final inte­grant struc­ture is built  in order to sup­port all devel­oped pieces and hav­ing in mind the char­ac­ter­is­tics of each indi­vid­ual piece.

The indi­vid­ual pieces — OMPs (Open Mobile Pieces) can range from 3D printed sculp­tures to elec­tric and/or motor­ized works… stop by Alt­Lab on any Tues­day (from 8.30pm on) and check it out.

Período de desen­volvi­mento — Abril — Julho 2013
Posted by Vincent Parollo at 7:34 AM No comments: